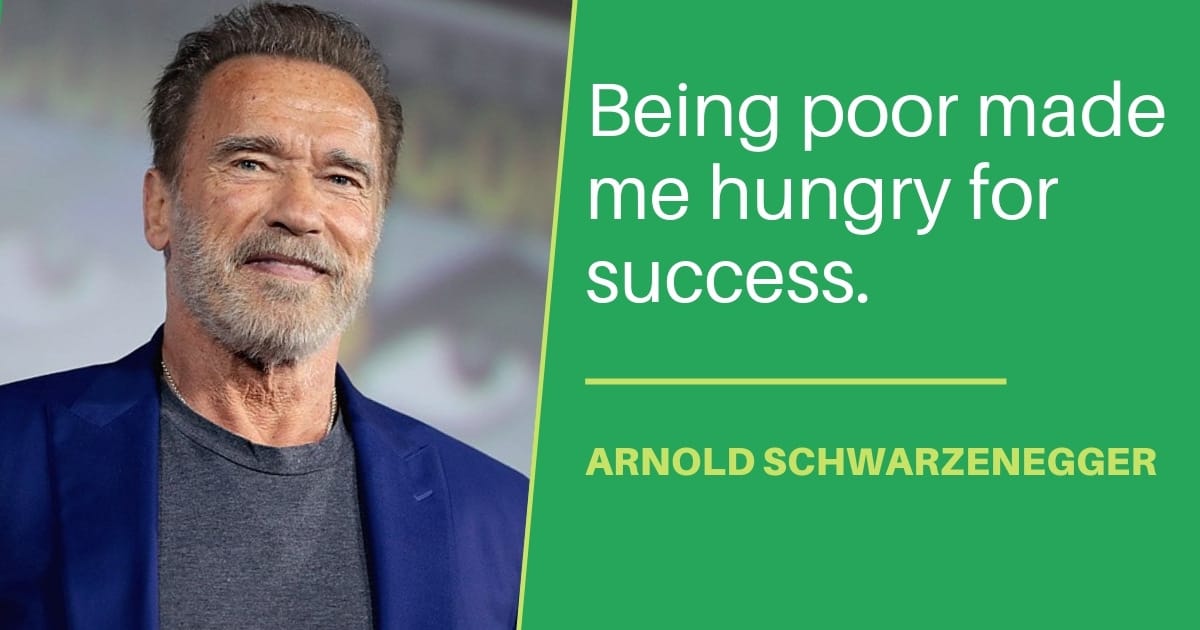 Arnold Schwarzenegger is one of those people that seems to be successful in everything he does. He has been a world-champion bodybuilder, a successful businessman in many areas from mail-order to real-estate, a movie star and even as a successful politician when he was the Governor of the state of California.

Since I enjoy studying successful people, I have done a lot of research into Schwarzenegger’s life over the years. Some of the best insights into his life came from his autobiography, “Total Recall.”  I have written a short review of it on my list of favourite autobiographies. I recommend you read that post if you like reading about successful people.

Anyway, back to Arnie. In this post, I have compiled a list of three stories from his life. Each one has several life lessons that I think we can all learn from.

Speaking about his childhood, growing up in Austria, Schwarzenegger has often said that didn’t like Austria. When asked why in an interview, Arnie replied “I felt that I was in the wrong place. In Austria, everything is small.”

He knew he wanted to leave Austria but he didn’t know where he wanted to go until a few years later when he watched a documentary at school about life in New York City. The massive size of everything from the buildings to the cars and bridges was what appealed to him. From that day, his goal was to leave Austria and to go and live in the USA.  “I knew what I wanted. I just had to figure out how.”

A short time later, he read about a British bodybuilder called Reg Park who had managed to get work in the USA as an actor in the Hercules movies. It was his body-building physique that had helped him get the acting work.  When Schwarzenegger read that, he had his goal and plan. He would train as a bodybuilder and use his physique to get a job as a Hollywood actor.

So, he got into bodybuilding and dedicated his life to it. He won a few major contests in Europe and started to get a name for himself.

His big break came when he received a telegram from a certain Mr Weider who was the owner of the number one magazine dedicated to body-building. The telegram read: “We would like to meet you at Mr Universe competition in Florida next week.” This was it – the big opportunity to go to the USA.  Arnold only had one week to get a visa and prepare for the trip. Speaking about what was going through his mind when he packed his bag he says:    “When I packed my small travel bag and left the apartment (in Munich) for my trip to USA, I knew that I would never be coming back.”

He was right. He went to the USA and met Mr Weider who took him under his wing. Arnie never went back to Europe. The rest is history.

Lessons from this story:

The importance of having a clear goal

Arnold had the big goal of going to live in the USA to be a bodybuilder and to become an actor. That was crystal clear in his mind. He didn’t know exactly how that was going to happen but that didn’t matter.

Having a clear goal gives us something to aim at. We need to know where we’re going but we don’t need to know how we’ll get there when we start. All we need to know is the first few steps. We can work the rest out as we go along. We should set a goal, commit to it and then start taking action and adjusting our trajectory as we go. Too much planning and analysis leads to fear and fear leads to procrastination. Clear goals and fast action are what brought Arnie success and we can do the same.

Take a leap of faith

Arnie packed his bag for the USA for what was only supposed to be a short trip and a meeting with Mr Weider. But he knew deep down that he would not be coming back to Europe. That took real guts to just pack a small bag and travel to another country knowing you wouldn’t be returning.

Sometimes, we have to overcome fear and stop worrying about “What if I don’t succeed?” If we know there is no going back, we have no choice but to succeed.

In 2003, Arnold Schwarzenegger was thinking about getting into politics. He wanted to become the Governor of the state of California. At the time, the existing Governor, Gray Davis was hugely unpopular.  Under Californian state law, in exceptional circumstances, if a Governor is judged to be incompetent, he/she can be kicked out of office and replaced through a special election called a “recall election”. In the summer of 2003, things were starting to come to a head and an attempt to trigger a recall election was in progress but nobody knew if it would succeed. To give some context, seven of the previous nine recalls had all failed to happen.

Schwarzenegger was following the situation very closely. He lived in California at the time and was certain that a recall would take place because he knew first-hand of how Californians were unhappy with the existing Governor. But he wanted the opinions of others. He had a few contacts at the White House and so reached out to Karl Rove for advice. Karl Rove was Senior Advisor to President Bush at the time, so an extremely experienced politician. Schwarzenegger asked Rove if he thought there would really be a recall election in California. Rove’s reply was, “CA is a crazy state. Forget it. Pay no attention to it. Governor Gray will never get recalled. “

Arnie appreciated the advice but he remained convinced that there would be a recall election because of how unhappy people were feeling in California. So, he ignored the advice, returned to California and started preparing. The recall did indeed happen and he ran for Governor as a Republican. In October 2003, he won the election and was sworn in in November 2003.

In just a few months, he had taken an idea and turned it into reality. With zero experience of politics, he was now in charge of the USA’s largest state economy.

Lessons from this story:

Make your own decisions

It’s good to ask for advice from experts, but must make your own decisions. Trust your own knowledge and instincts. Have respect for other people with more knowledge than you but don’t worship them. It’s essential to learn to think for yourself.

Arnie had no experience in politics but knew he could do it and he also knew there was a high chance that recall election would happen. Complete belief removes doubt and fear and that clears the way to decisive action.

Story 3 – Growing up in Austria

Arnold Schwarzenegger grew up in a small village in the mountains of Austria. It was a very poor upbringing. – In the family home, there was no plumbing, no hot water and no heating. The only source of heat was a wood stove.

In a recent TV interview with Graham Bensinger, he was asked about growing up in poverty:

Bensinger: What did being poor teach you?

Being poor made me hungry for success. You don’t shy away from anything. I loved working because it was the way out of poverty.

So, for Arnie, being poor forced him to work and he quickly understood that hard work was the way out of poverty. He often talks about poverty giving him desire and fire in his belly.

His parents instilled the importance of work from an early age. When he was aged 15, he was working at a local printers and his parents made him pay a third of his wages to contribute to the cost of food. At the time, he resented them for that but with hindsight, he later realised it was that tough childhood that made him want to succeed. It was the catalyst that pushed him to work hard to be able to leave that life of poverty behind him.

There are a few lessons we can learn from this story:

Turn a negative into a positive

A tough environment is a big obstacle to overcome. Instead of feeling overwhelmed and giving up, the best way to deal with it is to use it as motivation to work hard so as to be able to leave that environment as quickly as possible.  In fact with the right mindset, the tougher the environment and the harder things get, the more determined you will be to work your ass off to be able to escape.

I have first-hand knowledge of this right now. I am not living in poverty but in my apartment block I have very noisy neighbours where I live.  I live in the middle apartment on the middle floor and so have neighbours on all sides, top and bottom.  They seem to be constantly slamming doors, dropping things on the floor and moving furniture around. At the time of writing, we are in lockdown because of Covid and that is probably making the situation even worse because people are spending more time at home than usual and people’s schedules are messed up.

I work from home and the noise during the day makes it very hard to concentrate and the noise at night makes it very hard to sleep. Instead of getting mad and admitting defeat, I block out the noise with ear defenders and work even harder on my business so that I can afford to move out of here into a bigger and better place. Every time I hear someone slam a door or drop something on the floor, I smile to myself and get back to work. I imagine the luxury top-floor apartment (with no neighbours next to me or above me) that I will be soon buying for myself and I imagine leaving all of these annoying neighbours behind in my tracks.

Turning a negative into a positive is a very powerful technique and it will also keep you sane!

Arnold Schwarzenegger’s life is a fascinating one. I strongly recommend you read his autobiography for his full story. You can read my review of it on my list of recommended autobiographies.

What do you think about Arnie? Tell me in the comments below.