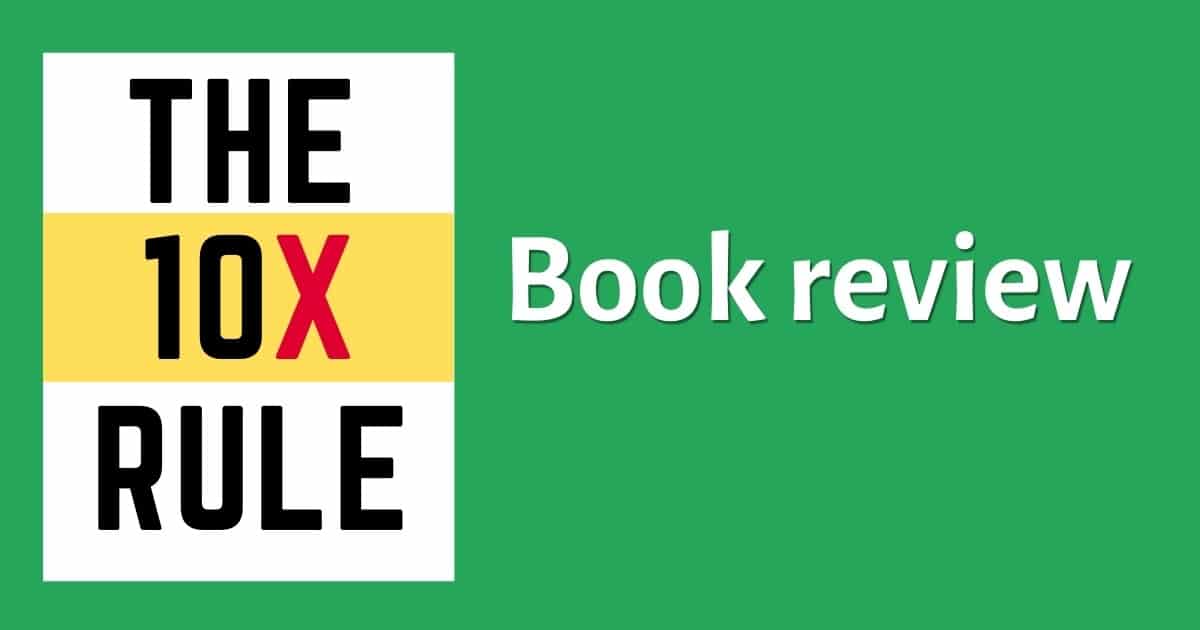 (When you buy through links on our site, we may earn an affiliate commission.)

I first came across “The 10x Rule” book on Amazon because it kept appearing in my personalized list of recommended books. I’ll be honest – at first, I ignored the recommendation because the cover and title “10x rule” annoyed me! What does that title even mean?” However, after a few weeks of seeing this book literally everywhere and with very positive reviews, curiosity got the better of me and I decided to take a closer look.

Here is a quote from the sale’s page:

If you want to achieve extreme success, you can’t operate like everybody else and settle for mediocrity. You need to remove luck and chance from your business equation, and lock in massive success. The 10X Rule shows you how!

Well now I understood why Amazon had been recommending me this book like crazy. I’m very interested in increasing productivity and I have read lots of books on the subject.  So now I really wanted to know what this secret 10x rule was.

I had never heard of the author, Grant Cardone before. A quick google search informed me that he is a larger-than-life salesman who has made a lot of money from selling sales training courses. He has also made a lot of money from real estate.  Following his business successes, he has starred in a few US reality TV shows based on sales and turning around failing businesses.

I am always open to learning from successful business people and I do sometimes struggle with procrastination so I bought the book and read it.

It’s all about massive action

The main idea behind the 10x rule is as follows. When aiming for success, you have to do everything to the magnitude of ten. The “10x” therefore means “ten times” or multiple of ten. It all starts with goal setting. The author explains the importance of setting big goals (ten times as big as usual). Then you need to estimate how much effort is required (yep, you guessed it – it will probably be ten times what you originally thought) and then finally, you have to take ten times the amount of action to achieve the goal. The author guides you through the whole process of how to do all of those key steps in the book.

I have obviously simplified it in the previous paragraph. There is a lot more to the book than just taking massive action towards massive goals. There is also a big emphasis on changing your mindset to how you think about success and work. The author gives you a framework that can be applied to a wide range of cases.

I always read self-help books like this with an open mind. My attitude is as follows: – If there are just 1 or 2 key concepts in a book that will make a real difference to my life, then I consider the book to be a worthwhile purchase.

I estimate that there were about five concepts in “10x rule” that I have implemented that have improved my productivity significantly. One of my problems has been lack of focus on the daily grind. – Doing the boring day-to-day stuff that really moves the needle. Several chapters of this book have helped me address that and become a success story.

An example of how this book has helped me

I am not going to give spoilers into all of the specific concepts that helped me because I do recommend that you buy and read the book yourselves, but let me give one example. – The author talks about people who are lazy and procrastinate often think that they are avoiding fatigue and stress by not doing the stuff they should be doing. The reality is that doing nothing also takes up energy and effort. Procrastinating is very stressful because you know deep down that you are lying to yourself and to others about how much work you are getting done. Coming home from work and lying to your wife/husband that you’ve had a busy day will eat away at you. It results in self-loathing, frustration and even anger issues. All of that consumes a lot of energy.

So, if procrastination is stressful and takes up a lot of energy, then you might as well actually get the work done that you are supposed to be doing! You will be using up the same amount of energy and there will also be a bit of stress but at the end of the working day, you will have achieved something worthwhile. You will be one step closer to your goal and your self-esteem will get a boost which in turn will motivate you to get your stuff done every day.

The above concept has been a game-changer for me and my work output.  I have gone from writing one blog post and making one YouTube video per week plus a load of unimportant stuff to writing 3-4 posts per week and a YouTube video and dropping all of the unimportant tasks. (Oh, and it didn’t take me ten times the number of hours – The 10x thing is not to be taken too literally. I work harder for sure, but it’s more about focusing on the important things.)

A lot of the advice in the book might seem like “doh!” obvious advice, but that is exactly what chronic procrastinators need. The above concept is just one of about ten that are described in the book. Not all of them will resonate with you or apply to you. There are probably about five in total which have really made a difference for me. That’s a great result as far as I am concerned. I definitely consider myself to be a 10x rule success story!

Firstly, there are a few chapters of the book that I would consider to be “filler”. The author has some strong opinions about the economy and society as a whole and he seems to use 2-3 chapters of this book as a platform to have a rant about them. Again, I won’t give spoilers about specifics but he seems to have a problem with the fact that becoming “middle class” is the goal of so many people. The author doesn’t think that that is a worthy goal. I suppose this chapter was confusing to me because I am British and the British class system is very different to the American one. If you are “middle class” in the UK, you are way richer than if you are “middle class” in the USA.  Anyway, regardless of whether you agree or not with the author, I felt that the chapter contributed very little to the book. There is no practical lesson.

Secondly, there were a few other chapters in the book where the author seemed to be arguing over semantics.  As an example, the author states he doesn’t agree with the importance of doing activity “ABC” – Instead, the author says that he concentrates more on doing “XYZ” – The problem is that what he describes as activity “XYZ” is in fact just another way of describing activity “ABC”!  So, he’s saying he doesn’t do something but in fact he does – he just calls it by something else. So those chapters end up being quite confusing and don’t really add any value.

Anyway, those are minor issues. There are 23 chapters in the book and only about four of them didn’t resonate with me. No book is perfect.

The characteristics of successful people

Chapter 22 of the book is absolute gold! In this chapter, Grant Cardone has compiled a list of the 32 characteristics of successful people. For each one, he also contrasts it with the corresponding bad habit of unsuccessful people.  As I read this chapter for the first time, I found myself nodding my head and thinking “Yeah, that’s true, I don’t do that but I can see why that is important.” Although, a few of the items on the list are obvious, the real value comes from having them clearly outlined with the author’s explanation and examples.

After reading this chapter, I had a list of areas I know I need to improve on. Just being aware of this list has helped me improve. For example, one of the characteristics is “Go all the way” – The idea is that successful people don’t hold back. When they do something, they don’t do half measures. It is very hard to really succeed at something if you’re trying to fly under the radar. You should either do something well and until completion or there is no point in doing it all.

It was that advice from the book that encouraged me to start this blog in total transparency with my full name, photo and back-story. I had been wanting to start a blog for ages but had always held back because of not wanting to really put myself out there. Well, the advice of “Go all the way” from this book made me realise that a successful blog needs to have a strong identity and a real story of a real person behind it. So here I am. 🙂

There are 31 other success traits in the chapter. That chapter alone makes the book worth it. I read it at least once a week to keep me on track.

If you are feeling frustrated with under-achieving and you truly want to take your life and income to the next level, then this book is for you.

The author, Grant Cardone, is a very successful businessman who knows what he is talking about. His success has come from taking massive action and refusing to procrastinate and waste time.

If you want to replicate his success, I strongly recommend you buy and read “The 10x rule”. It has had an almost immediate impact on my life and helped me achieve so much more in my business. – I am sure it will do the same for you.