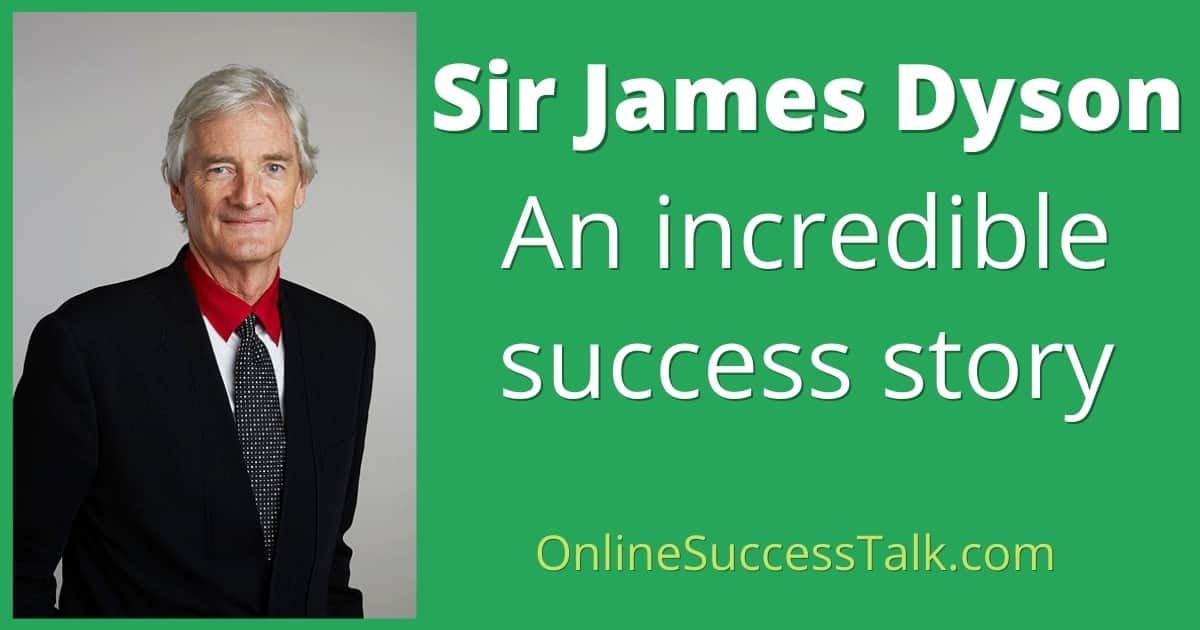 Let me tell you the incredible story of James Dyson. He is a highly successful British inventor. Think of him as the British version of Thomas Edison or Henry Ford!

Dyson’s cyclone technology doesn’t use any bags at all. Air is sucked into a plastic cone-shaped object. The dust is separated from the air thanks to centrifugal forces. The dust falls to the bottom and is collected in a tray and pure air escapes. No clogging, no loss of suction and no smells.

Dyson’s story is inspiring due to his sheer dedication and focus during the design phase – It took him 15 years of his life and over 5,000 prototypes working in his garage to come up with a working model! A special mention also to his wife, Deirdre Hindmarsh, whose teaching salary supported them both during those years.

Completing the design of the cyclone cleaner was just the start of Dyson’s incredible story. You would think that the manufacturers of traditional cleaners would have been eager to do a deal with Dyson in order to license his superior product. – Wrong!

From their short-sighted perspective, they didn’t want to pay Dyson licensing fees for his invention because that would reduce their margins. In their opinion, they could just carry on with their inferior product and continue earning their massive margins. They also loved the existing technology because it generated huge revenue in disposable cleaner bags. So, they refused to do business with Dyson, certain that his invention would go away without their investment.

Most people would have just given up there. Not Dyson. He made the decision to start his own manufacturing company and to take on the manufacturing giants and beat them at their own game. If they didn’t want to manufacture his product, then he was determined to do it himself. And that’s what he did.

In 1993 he set up a factory in the UK to produce the Dyson Dual Cyclone and then started advertising it directly to the British public using TV ads with the slogan “Say goodbye to the bag”. It was a huge success and went on to outsell cleaners made by the very same manufacturers that had rejected him several years earlier. Sweet revenge.

Dyson’s story is impressive. Just think about it. – Not only did he work every day for 15 years just to design the product, but then he battled with some of the biggest corporations in the world. He competed with huge multinationals that have teams of engineers, lawyers and endless resources and most importantly, he won. It really is a David vs Goliath story.

The big lesson I learn from his story is that hard work and persistence are key to success. Instead of seeing each failed prototype as an actual failure, he saw them as a step closer to success. He had hundreds of obstacles in his way and reasons to quit but his complete belief in his product and in himself meant that he succeeded.

In 2006, the Queen presented him with a knighthood and his full title is now Sir James Dyson.

Here is my favourite quote of his:

Success teaches you nothing. Failures teach you everything. Making mistakes is the most important thing you can do.

I learned about the James Dyson story by reading his autobiography a few years ago. I find reading autobiographies of successful people an excellent source of inspiration. I read them when I need a boost to motivate and inspire me.

Every one of the books on that list has helped strengthen my belief that success is most definitely possible if you work hard for it.

Here is a true story to illustrate the power of belief.  Before 1954, nobody believed that it was possible to run a mile in under 4 minutes. Nobody that is, except British athlete, Roger Bannister. He did believe it was possible and so trained for that goal with total unfaltering belief. In 1954, he succeeded with a a time of 3:59.4

Then something interesting happened. Everyone’s belief system changed. Now, everyone believed it was possible to run a mile in under 4 minutes and the record was broken again only 46 days later and thousands have gone on to do it since then.  Nothing had changed in terms of running shoes or any other equipment. A belief that something was possible was all it took.

Be inspired but don’t be a dreamer

Reading about other people’s success is important to get inspired but don’t be a dreamer. I fell into that trap a few years ago while working on one of my websites. After a few weeks of writing content, I was feeling burned out and needed a boost so I started reading other blogs income reports, listening to podcasts of interviews with successful bloggers and hearing all about how much money they were earning. I started seeing dollar signs and then began dreaming of how much money I was going to earn.

It was ridiculous. The website wasn’t even finished and I had already started planning how I was going to spend the money! With hindsight and analysis, I was procrastinating not out of laziness but because the niche of that website bored me to tears. Thinking about money was way more fun than writing articles about a topic I had no interest in at all.

I learned 2 lessons from that project:

Living vicariously through others is just another form of procrastination. Work on yourself and your own projects

My rule for reading about other people’s success – I do it in my freetime at the end of my work day. I never do it when I should be working. My goals come first. If I want to read about someone else’s success, I’ll sacrifice my leisure time to do it. So instead of watching TV in the evening, I’ll read an autobiography of someone I admire or maybe a personal development book.

Finally, when I am reading about other people’s success, I make a conscious effort not to let their stories distract me from my goals and projects. I know my strengths and weaknesses and I base my goals and projects around them. For example, my focus is on content management, blogging and YouTube. That is what I am good at and what I enjoy.

So, if I am reading about an entrepreneur who is making millions from podcasting or whatever, then that is fine, I’ll read about his/her success with great interest and I might even take a couple of notes but only if there are some lessons to be learned that I can apply to my business.

For example: Maybe the podcaster mentions some marketing technique that I could apply to one of my websites, then I might look into it. However, I will not be tempted to diversify into podcasting just because I hear someone who is making money from it.  I already knew that podcasting can be lucrative. I am reading about them not because I want to get into it myself, but because I want to be inspired by the person’s work ethic, mindset, how he manages his time etc.  It’s a very important distinction to make.

Specialization is essential. Do not try to be a Jack of all trades. You must cure yourself of FOMO (Fear of missing out) and of shiny object syndrome. Stay laser focused on your core business.

Sir James Dyson’s story is proof that hard work and persistence are essential to success. Failure is not a negative thing if you learn from your mistakes.

Reading about other people’s success stories can be very inspiring and motivating especially when you’re starting to doubt yourself and feeling in a slump. They are a great way to renew belief and give you a boost.

Check out the autobiographies of successful people that have inspired me the most.

It is important not to get ahead of yourself by dreaming of success before you even achieve it. Read about others in your spare time, not during work time and most of all, stay focused on your own goals and projects.

What are some of your favourite success stories that have inspired you the most? Tell me in the comments below.